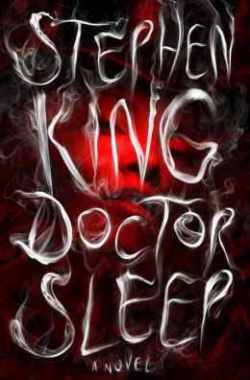 “Life was a wheel, its only job was to turn, and it always came back to where it had started.”

There have been so many reviews of Stephen Kings latest book that I feel kind of foolish writing another. But, it is part of the challenge that I signed up for. So, here we go…

I am a Stephen King fan through and through. When I turn the first page, I expect nothing more than a great story. I don’t expect to be scared silly — I don’t think most of what he has written was particularly scary…sometimes disturbing, but not really “jump-out-of-the-closet-at-you” scary. I think people need to drop “The King of Horror” moniker and maybe change it to “The King of Tale”? Maybe?? (Be careful with the spelling, though.) Okay, maybe not a great idea. But, you get my meaning. Anyway…moving on.

Okay, what can I say about this book that hasn’t already been said? My thoughts:

1) It was a perfect sequel. It’s fitting that Danny, all grown up, joins forces with a young girl that also has The Shining to fight an evil band of steam sucking vampires!

2) As always, there is help from unexpected heros.

3) The main characters are fighting their own inner demons while battling the outer bad guys — one of my favorite parts of most SK books. None of the heroes are perfect.

4) The unexpected can/should be expected.

5)   You’ll always get a great quote that stays with you long after you’ve turned the last page (see opening quote).

I don’t know what Stephen is working on now. But, I’ll be waiting and keeping an eye on those convoys of RVs as the roll through my town.

Here is the completed list of books for the 2013 Catch Up Reading Challenge:

Just an avid reader in the little town of Bangor, Maine (Yes, that Bangor...home of Stephen King). When I'm not reading and drinking coffee, I sell cell phones by the sea shore.
View all posts by Paul H-C →
This entry was posted in blogging., Books, Reading, Reading Challenge and tagged Catch Up Reading Challenge, Doctor Sleep, Stephen King. Bookmark the permalink.