Last year I stumbled across the “Catch Up Reading Challenge” hosted by Tammy at Books, Bones & Buffy. It looked like it would be a fun adjunct to the Tewksbury Public Library’s 50 Books Challenge and it was! So, I decided to do my own this year.

Here’s a picture of the CURC shelf! 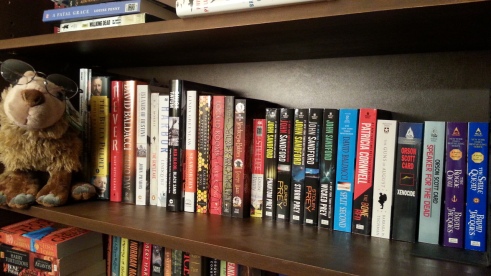 “Stu the Reading Capybara” is keeping on eye on me! It’s all about accountability!

7) Islands of Destiny by John Prados

14) The Casebook of Newbury & Hobbes by George Mann

22) The Bone Bed by Patricia Cornwell

23) The Guns of August by Barbara W. Tuchman

26) Speaker for the Dead by Orson Scott Card

27) The Rogue Crew by Brian Jacques

28) The Sable Queen by Brian Jacques

Leave me a comment and let me know what books/authors you’re going to catch up on this year.